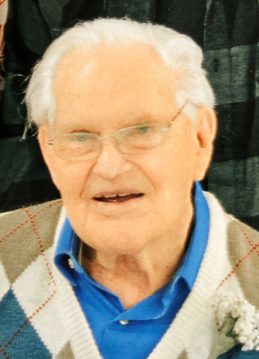 Roger was a veteran of the U.S. Navy, serving from 1943-1946 during WWII. He worked for Colfax Grain for 20 years and Shoestring Sausage Pizza Topping for 24 years.  He retired in 1986. Roger was a member of the First Evangelical Presbyterian Church, Frankfort, Ind. He enjoyed antique tractor pulling, fishing, mushroom hunting and spending time with family.  Roger and Jo Ann enjoyed spending winters in Florida and in 2018 were voted Mr. & Mrs. Hickory at the Old Hickory Days in Colfax.

Visitation will be 1-2 p.m. Friday, February 28, 2020 at Archer-Weston Funeral and Cremation Center, 501 E. Clinton, Frankfort. Funeral Celebration will follow at 2 p.m. at the funeral home, with Kelly Kurth officiating. Burial will be in Plainview Cemetery, Colfax, Ind. Memorial donations may be made to First Evangelical Presbyterian Church.

He was preceded in death by his parents, son, Gary W. Mullendore, sister, Juanita Myers and 2 brothers, Harold and Ralph Mullendore