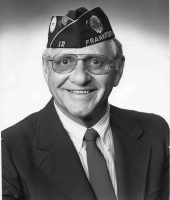 Gene Edward Lemen age 76 of Frankfort passed away in Florida February 5, 2009. Born October 13, 1932 in Charlestown, IL to T.P. & Helen (Harrell) Lemen. He was a graduate of Frankfort High School and served in the United States Marine Corp 1951-1954. He married Barbara J. Weaver on August 17, 1979 they later divorced, but remained friends and she was his caregiver during his battle with cancer. Gene spent 31 years working for Chrysler Corporation in Kokomo retiring in 1987. He was a member of Trinity Methodist Church, Moose, Eagles, 40 & 8, and Frankfort American Legion Post #12 where he served as Past Commander. Surviving is a daughter: Diana Cowan of Krum, TX, 2 stepsons: Jason Morrow and Robert Smock (wife Vicki) both of Kokomo. 5 grandchildren: Kris Smock, Jennifer McCook, Jamie McCook, Lyndsey Antosik, and Kristin Antosik, 1 great grandchild: Evan Smock, a brother Robert Lemen (wife Mary Ellen) of Frankfort and his longtime canine companion Hershey. He was preceded in death by his parents and a brother Bill. Friends may call 6-8 PM Thursday February 26, 2009 with a Memorial service held at 8 PM at Archer-Weston Funeral Home in Frankfort. In lieu of flowers memorials appreciated to either Clinton County Cancer Fund or Clinton County Humane Society.

One Condolence for “Gene Lemen”