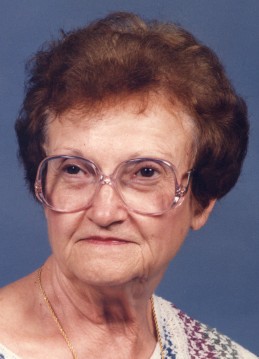 Geneva Faucett, 91, passed away on Friday, September 11, 2015 at Homewood Health Campus in Lebanon.  She was born on October 1, 1923 in Lafayette to Alva and Callie (Cadwallader) Hunley.  She married Harvey Faucett in 1940 and they later divorced.

Geneva attended Lafayette schools and Indiana Business College.  She worked for Mallory Controls in Frankfort for 5 years, Duncan Electric in Lafayette for 12 years and Coca-Cola in Frankfort for 2 years.  She was a member of First Christian Church and a former member of the Frankfort American Legion, Moose, and Eagles lodges. She loved playing BINGO.

Memorials in Geneva’s honor may be made to the NAMI West Central Indiana, 1508 Tippecanoe Street, Lafayette, Indiana  47904.

A graveside funeral service will be held at 1 p.m. Tuesday, September 15, 2015 in the Chapel of Peace at Green Lawn Memorial Park in Frankfort. Pastor Pamela Ditson-McCall will officiate.

She was preceded in death by her parents, 2 brothers and 2 sisters.

One Condolence for “Geneva Faucett”