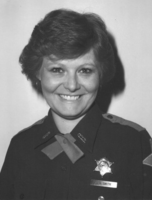 Judy A. McKee, 64, Frankfort, passed away June 13, 2010, at St. Vincent Hospital in Frankfort. Mrs. McKee graduated in El Paso, Texas and attended IUK. She thoroughly enjoyed her job at the Clinton County Sheriff’s Office where she was employed from 1980 to 2007. Her memberships included the Fraternal Order of Police, Moose Lodge, and she was a member of St. Mary’s Catholic Church and the Rosary Society. She was born February 14, 1946 in Marion, Indiana to Charles and Treva (Seeley) Bennett, and they survive. She married Col E. Smith Jr. in 1966 and they later divorced. She married Hobart McKee on Nov. 27, 1991 and he preceded her in death on Sept. 3, 2009. Surviving along with her parents are her daughters, Angela Ballew (Jerry) of Iowa and D’Andrea Cress (Bryan) of Indiana; step-children, Rowdy McKee (Donna), Joe McKee (Renee), Wendy Hall (Dennis), and Lora McKee all of Indiana; 4 grandchildren, Kayla Strother of Indiana, Erika and Dustin Smith and Allison Ballew all of Iowa; 9 step-grandchildren, Tanner, Sarah, Bekah, Rachel, and Kelsie McKee, Britney Murphy all of Indiana and Kristin, Dayna and Josh Ballew all of Iowa; 1 great-grandson, Leo Strother of Indiana; 1 brother, William Bennett (Doris) and 1 sister, Jo Lynn Pence both of Indiana. In addition to her husband, she was preceded in death by a step-granddaughter, Jessie Brammel. Private family visitation will be at Archer-Weston Funeral Home followed by a public funeral mass at St. Mary’s Catholic Church at 11 am Wednesday. Memorials appreciated to the donor’s charity of choice.