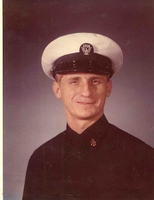 Keith Alan Cox age 52 of Frankfort passed away December 10, 2008 in Clinton House & Rehabilitation Center in Frankfort. Born July 22, 1956 in Frankfort to Robert L. & Josephine (Oberleas) Cox. He worked in maintenance for various factories during his life. He served in the US Navy 1979-1986. He was a member of Frankfort VFW, American Legion Post #12 and Navy Club Ship #12 of Lafayette. Surviving are his mother: Josephine Cox of Frankfort, 3 daughters: Josie Cox, Cindy Emery, and Crystal Cox all of Frankfort, 4 grandchildren, 2 brothers: Jim Cox (Harumi) of West Chester, OH and Rodney Cox of Jefferson, 4 sisters: Marie Gramman (Denny) of Lafayette, Colleen Thomas of Lebanon, Mona Weaver (Larry) and Judy Plumback both of Frankfort. He was preceded in death by his father and a sister. Funeral services with military honors will be held 1 PM Tuesday, December 16, 2008 in the Chapel at Marion National VA Medical Facility Campus 1700 E. 38th Street Marion, Indiana. Burial will follow at Marion National Cemetery. No calling is planned arrangements entrusted to Archer-Weston Funeral Home.