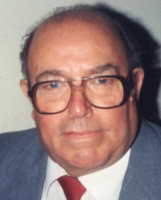 Marvin E. Huffer, 87, of Frankfort passed away April 23, 2013 at the Indiana Veterans’ Home in West Lafayette. He was born January 25, 1926 in Mulberry to Charles E. and Irene B. (Dunham) Huffer. He married Helen F. Galey on December 13, 1945 and she preceded him in death on September 30, 2006. Mr. Huffer served in the United States Army during World War II from 1944 to 1947 in the 78th Infantry Division. He was a recipient of the Purple Heart and Bronze Star. He worked for Unarco Rohn in Frankfort for 22 years and retired in 1991. He was a member of the Frankfort VFW, American Legion Post #12, was Secretary for the Fraternal Order of Eagles from 1982 to 2006, and played Santa Claus at the Eagles for 40 years. He attended First Church of the Nazarene. Marvin enjoyed camping and worked at Old Mill Run until 2005. Survivors include 1 Son: Daniel E. (Rita) Huffer of Frankfort; 3 Daughters: Stella I. (Monty) Bushong of Thorntown, Lori A. (Clayton) Amos of Frankfort, and Lisa R. Albaugh of Thorntown; 1 Brother: Harold (Linda) Huffer of Gosport, IN; 13 Grandchildren; and 21 Great-Grandchildren. He was preceded in death by his wife; great-granddaughter: Abby Amos; 2 sisters: Edith Alexander and Maxine Huffer; 5 brothers: Dale, Elmer, Wilbur, Clarence and Paul. Funeral services will be held at 2 p.m. Saturday, April 27, 2013 at Archer-Weston Funeral Home. Visitation will be from 4 to 8 p.m. on Friday, April 26. Pastor Shan Sheridan will officiate. Burial will be in Bunnell Cemetery in Frankfort. Memorial donations may be made to charity of donor’s choice with envelopes available at the funeral home.