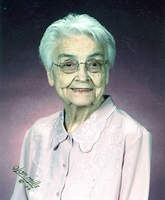 Nancye D. Pumpelly age 95, died Friday, May 21, 2010 at her home in Frankfort, Indiana. She was born on January 4, 1915 in Mason County, KY to the late William F. and Charlotte Dodson. She was the youngest of six children, all of whom preceded her in death. Nancye graduated from Mayslick High School in 1933. On August 28, 1940 she married R. Matison Pumpelly. In 1950 they moved to the Danville, Ohio area where they farmed and were active members of the Dodsonville Methodist Church. She served on the district board of the W.S.C.S. The couple later became members of the Hillsboro Church of the Nazarene. Following the death of Matison in November of 2003, Nancye moved to Frankfort, Indiana where she made her home with her daughter. Nancye enjoyed cooking, gardening, working puzzles and spending time with friends and family. She is survived by her four children: Nancye Rose (Dale) of Lancaster, OH, Charlene Trombley (Phil) of New Vienna, OH, R.M. Pumpelly II of Wilmington, OH and Pamela Bricker (Jim) of Frankfort, IN, a special “daughter” Verlene Heston (Noel) of Hillsboro, OH, five grandchildren, four great grandchildren and numerous nieces and nephews. One grand daughter preceded her in death. A memorial celebration of Nancye’s life will be held on Saturday June 5, 2010 at 4:00 PM at the Kirklin Christian Church, Pastor Joe McAdams officiating. A pitch-in dinner will follow the service. Memorials appreciated to Kirklin Christian Church, P.O. Box 186, Kirklin, Indiana 46050. Arrangements entrusted to Archer-Weston Funeral Home.

One Condolence for “Nancye Pumpelly”