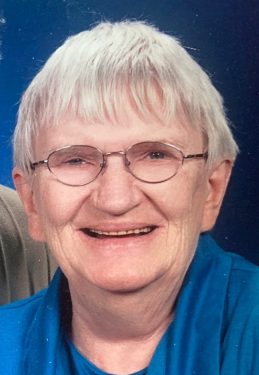 Pat was a 1957 graduate of Frankfort Senior High School and was a homemaker.  She was a member of Colfax Christian Church.  She enjoyed reading, crocheting, crafts, quilting, and was an excellent cook.

Memorial Donation may be made in Pat’s honor to the Colfax Christian Church, 314 S. Clark Street, Colfax, IN  46035.

A Funeral Service will be held at 1 p.m. Saturday, February 19, 2022 at Archer-Weston Funeral & Cremation Center, 501 East Clinton Street, Frankfort, IN  46041.  Friends may visit from 11 a.m. until the time of service at 1 p.m. Saturday at the funeral home.  Burial will follow in Plainview Cemetery, Colfax.

She was preceded in death by her parents, husband, daughter: Becky Jo Goff, brothers: Darrell Brennan and Floyd Anderson, and sister: Cora Lee.