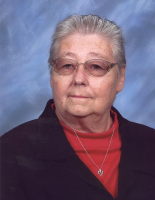 Patsy Jean Graham age 72 of Colfax passed away June 16, 2010 at her residence. Born January 29, 1938 in Clinton County, Indiana to Perry & Anna (Wood) Shoemaker. She was a graduate of Mulberry High School. She married Larry Dean Graham on Sept. 6, 1957 and he preceded her in death May 24, 1995. She worked several years at Colfax Food Locker Plant, and Wrights Hardware. She previously had worked at Bank of Lebanon and Mulberry Riggs Dairy Bar. She was a member of Colfax Christian Church where she taught Bible School many years, Member of Eastern Star, Home Economic Club, Euchre Clubs, was a played softball and coached when her children were involved, and was a Girl Scout Leader for many years, and participated in League Bowling for many years. Surviving are 4 daughters: Doris Hopwood (Ron) of Springfield, IL, Peggy Bush of Frankfort, Brenda Graham of Casa Grande, AZ, Cathy Plank (John) of Darlington. 4 grandchildren: Charles Matthew Stambaugh, Candace Stambaugh, Dean Stambaugh, and Tasha Plank and 5 great grandchildren as well as 1 sister: Nancy Amos (Bill) of Frankfort, and 1 brother: Tom Shoemaker of Lafayette. She was preceded in death by her husband, and a son-in-law: Joe Bush. No calling is planned and Graveside services will be held 11 AM Friday June 18, 2010 at the Mausoleum Chapel in Greenlawn Cemetery. In lieu of flowers memorials appreciated to Care & Share Committee of Colfax Christian Church. Arrangements entrusted to Archer-Weston Funeral Home.