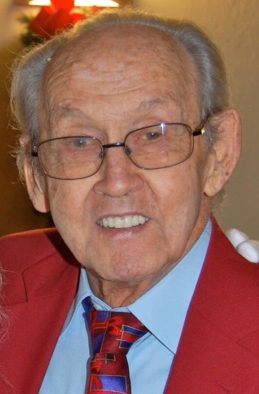 Ray Jean Batts, 95, of Frankfort, Indiana went to be with the Lord on September 15, 2018 at E.T. York Hospice, Gainesville, FL.  He was born in Boone County on December 3, 1922 and graduated from Jackson Township High School in 1942.  He is a member of the First Church of the Nazarene.  He served in the United States Army in Both WWII and the Korean Conflict.  Returning to Frankfort, he worked for the U.S. Post Office where he eventually became the Number 1 mail carrier.  He was a dedicated Red Cross blood donor giving over 28 gallons, making him one of the top five donors in Clinton County.  Ray Jean also worked, in retirement, for Sparrow Florist, Frankfort Medical Supply and Kraft Music Store.  He moved to Gainesville, FL in 2014.

Memorial donations may be made to the First Church of the Nazarene or by donating blood to the American Red Cross.

He is survived by his brother Rayburn Batts of Frankfort, IN and Daughters:  Shirley (Carl) Romey of Gainsville, FL and Nancy Batts of Winter Park, FL.  Also surviving are two grandchildren:  Curtis (Amanda) Romey of Bartow, FL and Valerie Romey of Gainesville, FL along with eight great grandchildren and a host of nieces and nephews.

He was preceded in death by his parents, Lula and Otis Batts and his wife of 60 years, Clara Ann Lipp Batts.