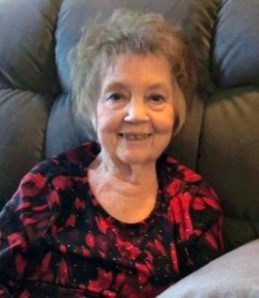 Thelma Joan Dillman, 82, of Frankfort passed away November 24, 2019 at Crown Pointe Assisted Living of Lebanon.  She was born on April 26, 1937 in Lafayette to William Stanley and Thelma June (McCord) Henderson.  She married Charles Perry Dillman on November 12, 1956 in Delphi and he preceded her in death on January 27, 2006.

Joan was a 1955 graduate of Delphi High School and was a homemaker.  She attended First Presbyterian Church in Delphi as a child and was formerly a member of Lebanon Bible Baptist Church.

Memorial donations may be made in Joan’s honor to Crown Pointe Life Enrichment Fund, 610 Crown Pointe Drive, Lebanon, IN  46052.

A Memorial Service will be held at 2 p.m. on Wednesday, November 27, 2019 at Archer-Weston Funeral & Cremation Center, 501 East Clinton Street, Frankfort.  Inurnment will be in Green Lawn Mausoleum at a later date.

She was preceded in death by her husband, sisters-in-law: Barbara and Carolyn, and a son-in-law: Thomas Smith.