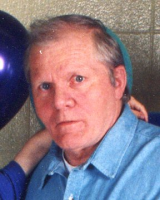 Thomas R. East, 74, of Frankfort passed away December 5, 2013 at Wesley Manor Retirement Community. He was born on November 23, 1939 in Elwood, Indiana to Von & Helen (Hardesty) East. He married Linda Gill on October 15, 1960 and she survives. Tom retired from Kroger in Frankfort and then worked for Sun Chemical, retiring in 2001. He was a member of the Eagles Lodge in Frankfort. Surviving along with his wife Linda are his Daughters: Kim Harris of Frankfort, Jade (Adam) Graham of Las Vegas, NV, and Lori Donoho of Lafayette; Grandchildren: Levi (Allison) Harris of Frankfort, Kali Graham and Thomas Graham both of Las Vegas, NV, and T. Matthew Donoho of Lafayette; Great-Grandchildren: Camden and Sydney Harris; Brother: David (Darlene) East of Frankfort; and Sister: Gloria Good of Frankfort. He was preceded in death by his brother Phil East and his sister Nancy Baker. No services are planned. Memorial donations in Tom’s honor may be made to Alzheimer’s Association with envelopes available at the funeral home.