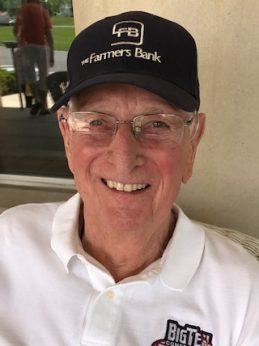 Bill was a 1944 graduate of Brazil High School, attended Indiana University where he was a member of the Kappa Delta Rho Fraternity and graduated in 1951 with his BS in Animal Science from California Polytechnic State College in San Luis Obispo, CA.  He served in the United States Navy from 1944 to 1946 during World War II and was recalled to active duty in 1951 to 1952 during the Korean War.  He was a livestock buyer with Producers Marketing Assoc., an insurance agent for Farm Bureau and an independent agent for Derrick & Derrick Insurance.  He was a member of the Clinton Masonic Lodge #54 and the Scottish Rite.  He was active in Rotary Club of Frankfort and a member of First Christian Church in Frankfort.

Memorial donations may be made to Wesley Manor or First Christian Church, envelopes will be available at the service.

A Memorial Service will be held at 2 p.m. on Sunday, June 2, 2019 at First Christian Church in Frankfort.  Burial will be at a later date in Cottage Hill Cemetery in Brazil, Indiana.  Archer-Weston Funeral & Cremation Center and Clinton County Crematory are honored to assist Mr. Dickson’s family.

Surviving along with his Wife: Frances are his Sons:  Joe (Cindy) Dickson Jr. of Batesville and Dr. Bob (Gretchen) Dickson of Indianapolis;  Daughter:  Susan (Mark) Blank of Frankfort;  7 Grandchildren;  and 9 Great Grandchildren.

In addition to his parents, he was preceded in death by his sister: Nancy Krieble, and his grandson: John David Dickson.