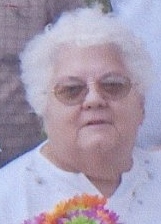 Rosalie Watkins 85, of Frankfort, Ind., passed away at 10:05 p.m. Sunday, May 29, 2016 at Wesley Manor in Frankfort, IN.  She was born on September 16, 1930 in Clinton County, IN to Mont Daris & Lela Lucille (Ellis) Allen.  Her first marriage was to William Goodwin.  She later married Harold A. “Zeke” Watkins and he preceded her in death on June 13, 1985.  Rosalie was a lifelong homemaker.  She was a member of the New Life Assembly of God in Frankfort.

Services will be 2 p.m. Thursday, June 2, 2016 at Archer-Weston Funeral and Cremation Center. Visitation will begin at 1 p.m. until time of service at the funeral home. Burial will be in Green Lawn Memorial Park in Frankfort.