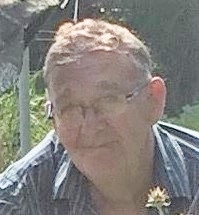 Grover C. Bales, 75, of New Haven, Connecticut, husband of Mary (Timothy) Bales, passed away on Easter Sunday, April 21, 2019 in Yale New Haven Hospital with his family by his side.  He was the son of the late Robert and Lillie (Northcutt) Bales.

For a quiet man, Grover’s heart and personality were larger than life.  He was born and raised in the rolling hills of Virginia.  He moved to Indiana, Florida and settled in Connecticut.  Grover was a worker and performed a variety of jobs including 20 years at Gaylor Hospital and continued as the neighborhood handyman during his five years of retirement.  He was an Army Veteran who served his country during the Vietnam Conflict from April 1970 to February 1971.  Grover developed deep and lasting friendships throughout his life.

A Funeral Service will be held at 1 p.m. Tuesday, April 30, 2019 at Archer-Weston Funeral & Cremation Center, 501 East Clinton Street, Frankfort.  Friends may visit from 11 a.m. until the time of service at 1 p.m. at the funeral home.  Burial with Military Honors will follow in Green Lawn Cemetery, Frankfort.

In addition to his wife: Mary, he is survived by his children: Robert Bales, Carla Williams, Angie LeMay and Jeremy Bales.  He also leaves behind his sisters: Christeen and Gladys Taylor and his grandchildren, great grandchildren and his loving nieces and nephews.

He was preceded in death by his brother: Patton Bales and two sisters: Barbara Bales and Mary Denham.