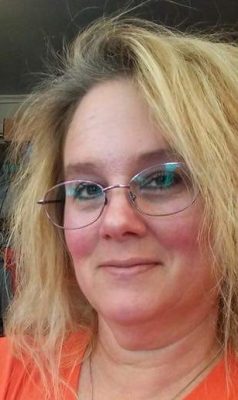 She was born on November 20, 1970 in Frankfort to Stan and Glenita (Dickey) Smith.  She was a 1989 graduate of Clinton Central Schools.  She worked for Zachary Confections for 20 years and had been a store manager for Good to Go on North Jackson Street in Frankfort.  She was a member of ABATE.  She loved spending time with her family and grandchildren and enjoyed attending music concerts.

Memorial donations may be made in Angela’s honor to the American Heart Association with envelopes available at the funeral home.

A funeral service will be held at 2 p.m. on Wednesday, April 4, 2018 at Archer-Weston Funeral & Cremation Center, 501 East Clinton Street, Frankfort.  Friends may visit from Noon until the time of service on Wednesday at the funeral home.  Pastor Cliff Howell will officiate.

She was preceded in death by her parents.