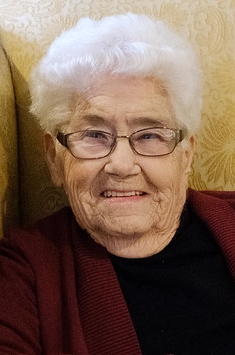 Anna Frances “Fannie” Belt, 94, of Frankfort, Ind. passed away September 23, 2021 at Wesley Manor Retirement Community, Frankfort.  She was born on May 22, 1927 in Caldwell County, Kentucky to Joseph and Stella (Oliver) Stromatt.  She married Barney Belt on April 20, 1946 in Hopkinsville, KY and he preceded her in death on February 15, 1991.

Anna attended school in Kentucky and earned her GED later in life.  She was a homemaker and had worked for Simmons Mattress Company for 15 years, retiring in 1974.  She was a member of the Lake Village Baptist Church and the First Baptist Church in Frankfort. Anna belonged to the Auxiliary Grange in Lake Village, IN.

Memorial donations may be made in Fannie’s honor to the Wesley Manor Employee Appreciation Fund, 1555 N. Main Street, Frankfort, IN  46041.