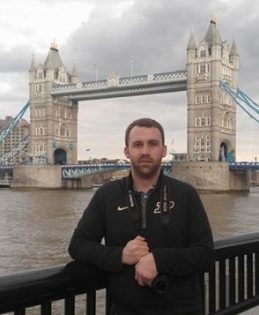 Austin Taylor Carson, 27, of Frankfort, passed away on Tuesday, August 8, 2017 in South Dakota while on a much anticipated motorcycle trip with his dad.

He was born on April 10, 1990 in Frankfort to Daniel and Sherrie (Taylor) Carson.  He was a 2008 graduate of Frankfort High School and earned his Associates Degree in 2011 from Indiana – Purdue University Fort Wayne.  He had been employed at Federal Mogul in Frankfort as a Manufacturing Engineer for 2 ½ years.  Austin was a fan of the West Ham Soccer Club and enjoyed playing soccer.  He was also a Certified “Storm Chaser”, a Tennessee Titans football fan, and loved to travel.

In lieu of flowers, memorial donations may be made in Austin’s honor to Archer-Weston Funeral & Cremation Center for donation to a fund to benefit his Fiancé and son:  Ariana Ruiz and Gareth Austin Carson.  Envelopes will be available at the funeral home.

Friends may visit from 2-8 p.m. Tuesday, August 15, 2017 at Archer-Weston Funeral & Cremation Center in Frankfort.  Funeral Services will be held at 11 a.m. Wednesday, August 16, 2017 at the funeral home.  Rev. Mark Mowery will officiate. Burial will follow in Bunnell Cemetery.

He was preceded in death by his Maternal Grandfather:  Willard Taylor and his Paternal Grandmother:  Darlene Carson.