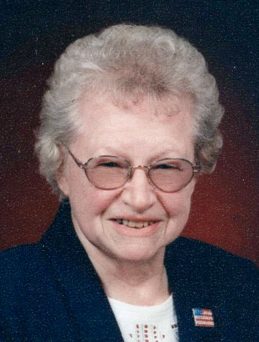 Barbara was a 1943 graduate of Frankfort High School.  She lived in Mishawaka from 1958 until 1990 when she returned to Michigantown.  She worked as a bookkeeper for Associates Financial Service in South Bend for 25 years and retired from Tower Federal Savings and Loan in South Bend.  She was a member of Michigantown United Methodist Church and was the former treasurer for the church.  Her other memberships included the Women of the Moose Chapter 302, Mishawaka Eagles, a homemakers club and the Jolly Dozen euchre club.  She enjoyed bowling and was a member of several leagues.

Memorial donations may be made to the Michigantown United Methodist Church, P.O. Box 237, Michigantown, IN  46057.

A Funeral Service will be held at 2 p.m. on July 13, 2019 at Archer-Weston Funeral & Cremation Center, 501 East Clinton Street, Frankfort.  Friends may visit from Noon until the time of service at the funeral home.  Burial will follow in Green Lawn Memorial Park.

She is survived by her Brother:  Richard G. Lee of Monticello;  Sister:  Marian D. Guffy of Kirklin;  Brother-in-law:  Rayburn Batts of Frankfort.  Eleven Nieces and Nephews along with several great and great-great nieces and nephews also survive.

She was preceded in death by her parents, her husband, her sister:  Helen Batts, brother-in-law: John K. Guffy Jr., sister-in-law: Norma Lee and a nephew-in-law.