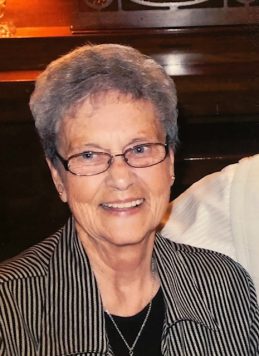 Betty Joe Cole, long time resident of Frankfort, passed away peacefully December 21, 2020, after battling a lengthy illness at Wesley Manor in Frankfort. She was 85.

Born on March 7, 1935 in Roaring Fork, of Wise County, Virginia to Robert and Elizabeth Rogers, Betty was raised with six other siblings – two sisters and four brothers – near Rose Hill, Virginia. A daughter of a coal miner, she grew up in a close knit family and in a community of industrious, hard working people. After moving to Frankfort, she worked for Peter Paul for 24 years and continued with Zachary Confections for several more.

She married Elmer (Herb) Cole of Bone Cave, Tennessee, on February 21, 1953, in Catoosa County, Georgia. Eventually they would have a daughter Judy Ann and a son Kenneth Wayne.

Betty was a wonderful wife and mother, and later grandmother and great-grandmother. She loved her family deeply, evidenced by her warm smile and gentle personality that was always present. She had many friends and social acquaintances in Frankfort and throughout Clinton County. Betty enjoyed playing cards, square dancing and traveling with Herb. Until his passing in July of 2019, they were always together, always devoted to and loving their family in their 66 years of marriage. She will be greatly missed by so many who loved her and were privileged to know her.

Memorial donations may be made in Betty’s honor to the Alzheimer’s Association, 50 East 91st Street, Ste#100, Indianapolis, IN  46240.

Along with her husband, Betty was preceded in death by her parents, sisters Ruby Jaynes and Fannie Mullins, as well as her brothers Will, Robert "Pee Wee" Jr., Buster and Lonnie Rogers.