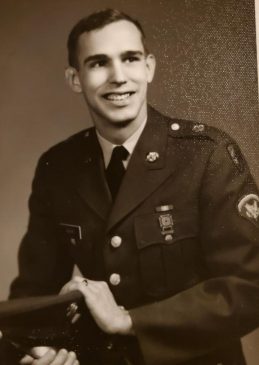 Bruce Lee Aughe, 76, of Frankfort, passed away October 28, 2021 at IU Health Arnett Hospital in Lafayette.  He was born on September 14, 1945 in Frankfort to Richard J. and Virginia (Baker) Aughe.  He married Julia Jean Phillips on December 20, 1974 in Michigantown and she survives.

Bruce was a 1963 graduate of Frankfort Senior High School, being in the first class to graduate from the Maish Road location.  He served in the United States Army, serving in Vietnam for 18 months.  He spent 27 years with the United States Postal Service, retiring as a letter carrier.  He was a member of the Michigantown United Methodist Church and his mission trip to Jamaica greatly strengthened his faith.  Other memberships included the Clinton County Genealogical Society, Model A Ford Club of Indianapolis, and NARFE.  Bruce was a life member and past commander of the VFW Post 1110 and had held offices with the American Legion Post 12, and 40 & 8.  He also served on the combined military honor guard and firing squad and had organized the Veteran’s Day and Memorial Day programs for several years.  He loved working on his Model A and woodworking.

Funeral Services will be held at 2 p.m. Tuesday, November 2, 2021 at Archer-Weston Funeral & Cremation Center, 501 East Clinton Street, Frankfort.  Friends may visit from Noon until the time of service at 2 p.m. at the funeral home.  Burial with military rites will be in Bunnell Cemetery, Frankfort, where he will be laid to rest next to his brother.  Following services, friends and family are invited to a meal at the VFW for food and fellowship.

He was preceded in death by his parents, brother: Alan, and a grandson: Adam Michael Stell.