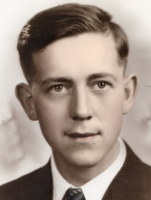 Cecil F. Woodruff, 85, of Frankfort passed away Thursday, July 10, 2014 at St. Elizabeth East Hospital in Lafayette. He was born on March 3, 1929 in Clinton County to Charles and LuLu (Ward) Woodruff. He married Ruth Ione Bledsoe on April 12, 1952 in Manhatton, Kansas and she preceded him in death on June 10, 2007. Cecil was a 1948 graduate of Rossville High School. He served in the United States Army Infantry from 1952 to 1954. He worked as a Railroader with Pennsylvania Railroad for 19 years, was a self-employed Farmer, and Equipment Operator for the Clinton County Highway Department. He was a member of the Frankfort VFW and American Legion and a member of Farm Bureau Co-Op. He enjoyed hunting, fishing, camping and traveling. Survivors include his Sons: Gary (Joyce) Woodruff of Rossville and Roger Woodruff (Fiance: Julie Sagarsee) of Frankfort; Daughter: Nancy Woodruff of Frankfort; Grandchildren: Jennifer, Janice, Janelle, Jeri, Cole, and Jessica; 8 Great-Grandchildren; Sisters-in-law: Dorothy Staley and Joyce Carroll; and several Nieces and Nephews. He was preceded in death by his wife, brothers: William “Bud” & Donald, and sister – Mildred. Funeral Services will be held at 10:30 a.m. Tuesday, July 15, 2014 at New Life Assembly of God, 2025 Washington Avenue, Frankfort. Visitation will be held from 4 to 8 p.m. Monday, July 14, 2014 at Archer-Weston Funeral & Cremation Center. Memorials in Cecil’s honor may be made to the Frankfort VFW, envelopes will be available. Burial will follow in Whiteman Cemetery.