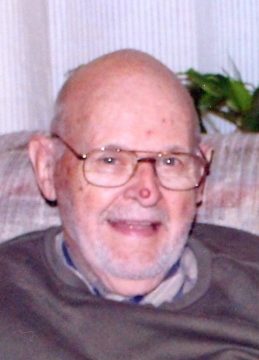 He was born on September 27, 1929 in Morgantown, Ind. To Charles Matthews Foster Sr. and Georgia May (Barnett) Foster.  He was a 1949 graduate of George Washington High School and attended Berean Bible College, St. Joseph Rensselaer, and Christian Ministry Center at Purdue.  He married Barbara J. Jones on February 3, 1950 in Indianapolis and she preceded him in death on December 20, 2012.  He then married Devona “Donna” Gillette on October 20, 2013 and she survives.

Mr. Foster began his ministry in 1949 and ministered in Rensselaer, Lebanon, Elwood, Winchester, VA, Bennettsville, SC, Laurinburg, NC, Aulander, NC, and Cape Hattres, NC.  He obtained his private pilot’s license in 1972.  Mr. Foster was a Non-Resident Volunteer Chaplain at Indiana State Prison 1963-1967; on the Executive Board of Directors at Eastern Indiana Bible College 1982-1985; and Vice President Shekinah Ministries in Marin, Mexico 1996-2005.   Chuck was a member of ROTC during World War II and has been a part of several concert orchestras and community bands in which he played the trombone.  He sang with the Continental Four in High School, the Gospel Four and the King’s Men in the 50’s & 60’s, and is a member of the Ambassadors Senior Choir in Lafayette and the Wabash Valley Area Band.

Memorial donations may be made in Chuck’s honor to the Gideon’s Bible Society with envelopes available at the service.  Archer-Weston Funeral & Cremation Center, 501 East Clinton Street, Frankfort is honored to assist the Foster family.

A funeral service will be held at Noon Saturday, October 21, 2017 at Lafayette Pentecostal Church of God, 3616 South 9th Street, Lafayette.  Friends may visit from 10 a.m. until the time of service at the church.  Pastor Chris Black & Rev. Melvin Lane will officiate.  Burial will follow in Bethel Cemetery in Attica.

In addition to his 1st wife Barbara, he was preceded in death by his son Charles M. Foster III, Brothers:  James and Jack, Grandson:  Adam, and great-grandson: Justin who died in Iraq.