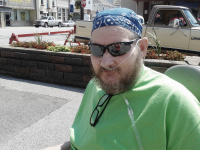 Charles “David” Cooper, 54, of Rossville passed away November 1, 2013 at St. Elizabeth Franciscan Hospital, Lafayette. He was born January 6, 1959 in Frankfort to James Paul and Shirley Jean (Kinslow) Cooper. He married Tammy Jo Lucas on July 9, 1994 in Jackson, Georgia and she survives.;David attended Frankfort Schools and was an owner/operator truck driver for 35 years.;Surviving along with his wife Tammy are his Mother: Shirley Cooper of Frankfort, Daughters: Chandra Cooper and Shirley Cooper both of Rossville, Heather Hernandez of Tennessee, and Kristen Marie Eldridge-Griffin of Frankfort, Sister: Wanda Sue Lewis of Coatsville, IN, Brothers: Paul “Daniel” Cooper of Cody, WY and Andrew Cooper of Frankfort, 5 Grandchildren, 1 Great Grandchild and his loving dog Buddy. He was preceded in death by his father.;Funeral services will be held at 3 p.m. Wednesday, at Archer-Weston Funeral Home. Friends may visit at the funeral home from 1 p.m. until the time of service. Memorial donations may be made to the American Diabetes Association with envelopes available at the service.