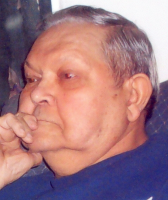 Clarence G. Reed, 85, of Frankfort passed away Thursday, June 5, 2014 in his home. He was born on October 5, 1928 in Frankfort to Truman Ray and Ruth J. (Martin) Reed. He married Rhoda Williams on September 24, 2003 and she survives. Clarence attended Frankfort Schools and served in the United States Army from 1950 to 1956. He retired after 45 years of service to Indiana Brass in Frankfort. He was a member of Zion Tabernacle Church. Surviving along with his wife Rhoda are his Step-Sons: Howard Williams and Joe (Deanna) Williams both of Rural Frankfort; Daughter-in-law: Jennifer Leach of Frankfort; Several Cousins; 8 Grandchildren; and 2 Great-Grandchildren. He was preceded in death by his Parents and a Step-Son: Robert Williams. A Funeral service will be held at 11 a.m. Monday, June 9, 2014 at the Archer-Weston Funeral & Cremation Center, 501 East Clinton Street, Frankfort. Friends may visit from 9 a.m. until the time of service at the funeral home. Burial will follow in Bunnell Cemetery, Frankfort.