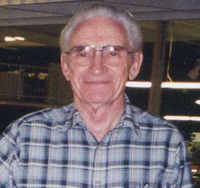 Clifford Vance Roberson age 81 of Frankfort passed away October 14, 2009 in his home. Born August 29, 1928 in Petersburg, Indiana to Stephen D. & Eloice ?Addy? (Ficklin) Roberson. He Worked on the Railroad as a young man, then moved to California where he owned and operated a grinding wheel manufacturing business. He was a faithful member of First Church of the Nazarene in Frankfort and helped with numerous mission projects and supported much of the mission work. He married Bethel ?Beth? Lawrence on November 24, 1949 and she preceded him in death on February 16, 1999. He married Marilyn Price on March 19, 2002 and she survives. Also surviving is a son: Kevin Roberson of Nashville, TN, a stepson: George A. Price (Kendra) of Kirklin, 2 stepdaughters: Linda A. Harris (Ted) of Kirklin and Peggy J. Reiff (Mark) of Zionsville, 6 grandchildren, 2 sisters: Kathleen Coomer and Marilyn Waggoner both of Frankfort and 2 sister-in-laws: Lucille Roberson of Cutler and Jerri Roberson of Frankfort, and several nieces and nephews. He was preceded in death by 2 brothers Don and Dennis ?Paul? Roberson.;Funeral services will be held 10 AM Saturday, October 17, 2009 at the First Church of the Nazarene with burial following in Oak Hill Cemetery in Kirklin. Friends may call 4-8 PM Friday at Archer-Weston Funeral Home and one hour prior to services Saturday at the church. Memorials appreciated to the Christian Life Center Building Fund at the First Church of the Nazarene.