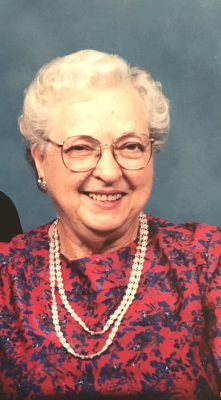 Darel Irene Tipmore, 96, of Rossville, IN, passed away with her family by her side on Tuesday, January 31, 2017 at Milner Community Healthcare in Rossville.  She was born December 9, 1920, in Renfro Hollow, Tennessee to the late Walter Lee and Luella Rice Decker.  On June 9, 1939 she married the late Claude Dewey Tipmore in Frankfort, IN.  He preceded her in death on August 27, 2008.

Mrs. Tipmore attended both Rossville and Scroggy schools.  She lived in Manson before moving to Rossville in 1954.  Darel and her husband farmed in Manson, owned Tipmore’s Drug Store, Texaco Station, and Darel’s Café all in Rossville.  She spent the remainder of her working years at the Purdue State Seed Lab and retired in 1984.  She loved reading, playing cards, working crosswords and puzzle books, and spending the winters in Florida with her sister.

Memorials in Darel’s name, may be made to Rossville Volunteer Ambulance Service, P.O. Box 50, Rossville, IN 46065.

Family will receive friends from 12 noon to 2 PM on Friday, February 3, 2017.  Funeral Service will begin at 2 PM following the visitation at the Archer Weston Chapel, 501 East Clinton Street, Frankfort, IN.  Chuck Foster will officiate and burial will follow in Green Lawn Memorial Park, Frankfort, IN.

She was preceded in death also by one brother Tom Decker and two sisters, Wilma Decker Rice and Phyllis Decker Helmberger, and son-in-law George Flora.