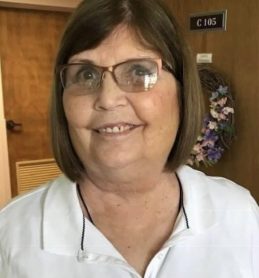 Deborah L “Debbie” Whiteman passed away on July 24, 2022 at the age of 68 in her hometown of Frankfort, Indiana. She was born on July 24, 1954 to Kenneth L. and Patricia A. Parker.  Debbie was previously married to Rick Whiteman with whom she had one daughter, Brandi Nichole.

After graduating from Clinton Central High School in 1972, she dedicated 41 years of service to Federal Mogul in Frankfort.  Debbie found great joy in the people she surrounded herself with.  She was a member of the Forest Baptist Church and the UAW Local 1949.  She loved family gatherings, especially those including her grandchildren, and attending festivals with her closest friend, Penny Boots. In later years, Debbie brought joy to her nursing home buddies at Wesley Manor by joining sing-alongs or just being her feisty self. Despite her medical challenges, Debbie remained cheerful!

A memorial service will be held at 2pm on Tuesday, August 2, 2022 at Archer-Weston Funeral & Cremation Center located at 501 East Clinton Street in Frankfort.  Friends may pay their respects beginning at noon prior to the service.

Debbie is survived by her daughter and her spouse, Brandi and John Leinenbach; grandchildren, Kaleb and Emma Leinenbach; parents, Kenneth and Patricia Parker; and siblings and their spouses, Penny and Ed Clendenning and Jeff and Annette Parker.