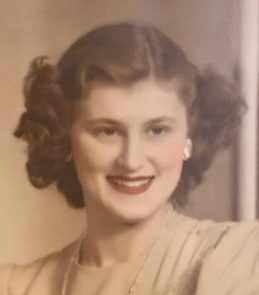 Dolores Vera Vergari, 90, of Frankfort, passed away on Friday, June 22, 2018 at Rosewalk Village of Lafayette, IN.

She was born on February 19, 1928 in Wilkes-Barre, PA to Walter & Alvina (Lincavage) Orloski.  She married Nello Louis Vergari in 1950 in Wilke-Barre, PA and they later divorced.  In 1985, she earned her Associate Degree in Accounting from Ivy Tech in Lafayette, IN.  Dolores was a homemaker and a member of St. Mary’s Catholic Church in Frankfort, IN.  She was a member of the Altar & Rosary Society, Ladies of Charity, Eucharistic Mininster, Lector, RCIA Member and Secular Franciscan – League of Night Adoration, Knights of the Immaculate, and Knights at the Foot of the Cross.

Friends may visit from 12:30 to 1:30 p.m. on Wednesday, June 27, 2018 at Archer-Weston Funeral & Cremation Center, 501 East Clinton Street, Frankfort.  A funeral mass will be held at 2 p.m. Wednesday at St. Mary’s Catholic Church.  Father Miller will officiate.

She was preceded in death by her parents, brother:  Edward Orloski, brother-in-law:  Ronald Saunders, and son-in-law:  Kenneth Shaff Sr.