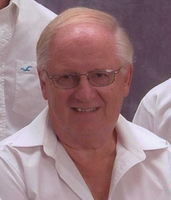 Don Earl Rash age 69 of Kokomo passed away 2 AM Friday February 26, 2010 in his residence. Born July 18, 1940 in Fortville, Indiana to William L. & Madora (Martin) Rash. He was a 1958 graduate of Warren Central High School. He worked for Medline Industries Chicago, IL in sales for 40 years calling on the Northern Indiana territory. After his retirement he enjoyed his car shows, train collecting, his family and especially attending his grandchildren’s sporting events. He was a member of First General Baptist Church, and several Railroad and Car Clubs. He married Joyce A. Pritchard on November 26, 1960 and she survives. Also surviving is a son: Jeff Rash (Natalie) of Indianapolis, 2 daughters: Lynn Craig (Jeff) of Burlington, Beth Brahm (Mike) of Kokomo, 7 grandchildren: Jacob and Molly Craig, Madison and Samantha Rash, and Evan, Noah, and Luke Brahm, as well as his 5 siblings: twin brother John Rash (Sherry Sawyer) and Darryl Rash (Patricia), Marian Cole (Gary) all of Indianapolis, Milsa Durell (Newman) of Newbury, NH and Martha Randall (Ralph) of Austin, Indiana. He was preceded in death by his father and recently his mother Medora on February 23, 2010. Visitation will be held 3-7 PM Thursday March 4, 2010 at First General Baptist Church 3017 E 100 N Kokomo, Indiana with a service 10 AM Friday March 5, 2010 at the church. In addition a joint visitation and service with his mother will be held 1-2 PM with a 2 PM service Friday March 5, 2010 at Flanner & Buchanan Funeral Center -Lawrence 5215 N. Shadeland Avenue Indianapolis, Indiana. Burial will take place in Oaklawn Memorial Gardens in Indianapolis. Memorials appreciated to First General Baptist Church Building Fund or Indiana Transportation Museum 825 Park Drive Noblesville, IN 46061. Arrangements entrusted to Archer-Weston Funeral Home in Frankfort.