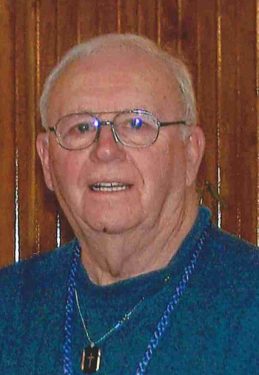 Don was a 1951 graduate of Colfax High School and attended Purdue University where he took a short course in Agriculture.  He served in the United States Army from April 1953 to April 1955.  He worked on the farm for 15 years before becoming a Union Carpenter for Local #215 where he worked for 45 years, retiring at age 63.  Don was a member of New Hope Church, Masonic Lodge in Jefferson, American Legion Post #12, Retired Union Carpenters Local #215, where he served as President. He was also on the Frankfort Community Public Library board, serving as president for four years.  Don loved his family and enjoyed woodworking, horse shows, and golf.

In lieu of flowers, memorial donations may be made in Don’s honor to New Hope Church, 5306 West County Road 600 South, Frankfort.

Funeral Services will be held at 1:30 p.m. Monday, October 19, 2020 at New Hope Church, 5306 West County Road 600 South, Frankfort.  Friends may visit from 11 a.m. until the time of service at 1:30 p.m. at the church.  Burial will follow in Plainview Cemetery, Colfax.  Archer-Weston Funeral & Cremation Center, 501 East Clinton Street, Frankfort is honored to assist the Gilmore family.  Out of respect for the health, safety, and comfort of all in attendance, guests will be expected to adhere to current CDC guidelines regarding appropriate social distancing and the wearing of masks.

He was preceded in death by his parents, wife: Joan, an infant son, and grandson: Grant.