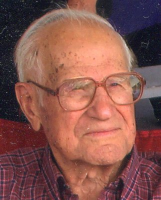 Donald J. Lipp, 99, of Frankfort passed away May 6, 2013 at Wesley Manor Retirement Community. He was born October 11, 1913 in Kilmore, IN to Lawrence L. and Maggie Belle (Sheets) Lipp. He married Doris Reagan on May 30, 1939 in Jeffersonville, IN and she preceded him in death on January 25, 2008.;Don graduated from Rossville High School in 1931 and served as an air plane mechanic in the United States Army from April 1943 to February 1946 during World War II. He was a lifelong Clinton County resident and was a farmer in Jackson and Johnson Township. He attended Kilmore United Methodist Church. He and his wife owned and operated a fishing camp in northern Minnesota, he raised ponies in the Scircleville area, and enjoyed woodworking and making furniture. Don played baseball in high school where he was the pitcher and continued playing on a semi-pro baseball team in Frankfort. He was a member of the American Legion Post #12 and a former member of the RV Club.;Survivors include a sister: Marjorie Smith of Frankfort, a brother-in-law: Marvin Reagan of Frankfort, and Several Nieces and Nephews.;He was preceded in death by his parents, wife: Doris, 1 brother, and 4 sisters.;Services will be held at 11 a.m. Friday, May 10, 2013 at Archer-Weston Funeral Home. Visitation will be from 6-8 p.m. Thursday, May 9, 2013 at the funeral home. Pastor Dave Klipp will officiate. Burial will be in Kilmore Cemetery in Kilmore, IN. In lieu of flowers, the family requests that memorial donations be made to the Clinton County Humane Society with envelopes available at the funeral home.