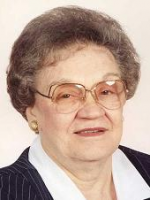 Doris V. Cook, 81, formerly of Frankfort passed away January 29, 2012 Union City, GA. She was born March 23, 1930 in Clinton County to Milton and Lucy (Jacks) Sharp. She married Robert L. Cook on May 27, 1950 in Frankfort and he preceded her in death on July 30, 1994. Doris graduated from Frankfort High School in 1948. She worked at Jules Simon and Peter Paul then became the manager of Farlow Travel which later became Holiday Travel here in Frankfort. Mrs. Cook attended Woodside Christian Church where she was baptized in 1943. She moved from Frankfort to Lakeside Park, KY then to Peachtree City, GA where she resided for the last 15 years. Survivors include: 3 Daughters: Vicki Conrad of Little Elm, TX, Patti Zell of Darlington, IN, and Jennifer Cook of Helendale, CA; Son: Joe Cook of Peachtree City, GA; 10 Grandchildren and 8 Great-Grandchildren; and Sister: Velma Potter of Scott’s Valley, CA She was preceded in death by a sister: Violet Cook and a brother: James Sharp. Services will be held at 2 p.m. on Friday, February 3, 2012 at Archer-Weston Funeral Home and Cremation Service. Visitation will be from Noon until the time of service at the funeral home. Burial will be in Green Lawn Memorial Park in Frankfort. Memorial donations may be made to American Diabetes Association with envelopes available at the funeral home.