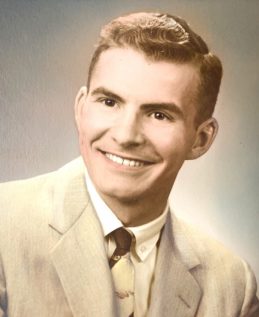 Dwight L. Hensley, 83, of Frankfort, formerly of Indianapolis, passed away on Friday, December 7, 2018 at Wesley Manor Retirement Community in Frankfort.

He was born on March 19, 1935 in Kirklin to Lawrence B. and Sylvia M. (Smith) Hensley.  Dwight was a 1953 graduate of Kirklin High School and attended Anderson University.  He served in the United States Army from 1957 to 1959.  He was Section Chief at the Veterans’ Administration Regional Office in Indianapolis for 31 years, retiring in 1986.  He was a member of the Emerson Avenue Church of God in Indianapolis.

Memorial donations may be made in Dwight’s honor to the Emerson Avenue Church of God, 3939 E. Emerson Avenue, Indianapolis, Indiana 46203.

A private family service will be held. Friends may visit from 12 noon - 1:30 on Tuesday, December 11, 2018 at Archer-Weston Funeral and Cremation Center, 501 E. Clinton St. Frankfort, IN. Burial will take place in Oak Hill Cemetery in Kirklin.

Surviving are several Nieces and Nephews.

He was preceded in death by his parents, 8 brothers, and a sister.