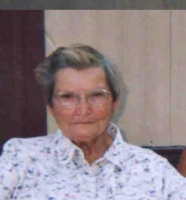 Gladys Irene Goodwin age 76 of Colfax, Indiana passed away December 3, 2008 in Methodist Hospital, Indianapolis from injuries sustained in an auto accident. Born April 26, 1932 in Portland, Indiana to Ernest & Goldie (Franks) Bright. She married William M. Goodwin July 12, 1958 and he preceded her in death February 12, 2002. She was a homemaker and laborer all of her life, she lived several years in Texas moving back to Clinton County, Indiana 13 years ago. She was a member of the American Legion and VFW Auxiliaries. Surviving are 2 sons: Carl Goodwin of Frankfort, Kenneth Espy (Debra) of Freemont, 3 daughters: Carolyn Espy-Brady (Mark) of Colorado Springs, CO;Rebecca ?Becky? Landon (Max) of Portland, IN;and Shirley Rogers of Graham, TX;3 stepchildren: Terry Goodwin (Lois) of Frankfort, James Watkins of Colfax, and Donna Eimen of Frankfort. A brother: Ernest Bright of Muncie and 20 grandchildren and 26 great grandchildren and several nieces and nephews. She was preceded in death by her husband, and a grandson. Funeral services will be held 11 AM Saturday December 6, 2008 at Archer-Weston Funeral Home. Friends may call after 10 AM Saturday at the funeral home. Memorials appreciated to the Colfax Senior Housing Community Center for activities.