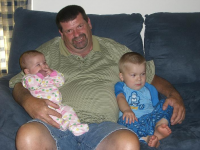 Gregory Howard Harris age 48 of Frankfort passed away September 21, 2009 in Home Hospital, Lafayette, Indiana. Born August 2, 1961 in Frankfort, Indiana to Othor ?Kenny? and the late Bertha Mae (Martin) Harris. He was a graduate of Frankfort High School, was a member of the Harley Riders, Clinton County Fishing Club, and League bowling. He worked for Bailey Trucking as a truck driver the past 8 years. He married Kim East on November 6, 1978 in Frankfort and she survives. Also surviving is his son: Levi (Allison) Harris of Lafayette, 2 grandchildren: Camden Gregory and Sydney Mae;his father Othor ?Kenny? Harris of Tipton;5 brothers: Phil Harris of Florida, Kenny (Pam) Harris and Jeff Harris both of Frankfort, Rodney Harris of Tipton, and Kevin Harris of Sparta, TN and one sister: Kimberly Harris of Sparta, TN. He was preceded in death by his mother. A memorial service celebrating his life will be held 7 PM Friday, September 25, 2009 at Archer-Weston Funeral Home friends may call after 5 PM Friday at the funeral home. Memorials appreciated to further his grandchildren?s education either to family or directly to the grandchildren?s accounts at Steel Parts Credit Union.