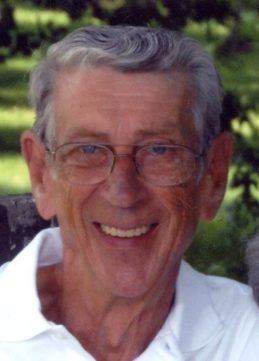 James Michael Kaylor, 80, of Frankfort passed away at 7:39 p.m. July 13, 2017 at his home, surrounded by his family.  Born January 23, 1937 in Frankfort to the late Kenneth Browning & Alta Ruth (Farr) Kaylor.  He married Mary Ann Camp on June 2, 1957 at the Eastside Christian Church in Frankfort and she survives.

Jim was a 1954 graduate of Frankfort High School.  A veteran of the U.S. Army, he served from August 13, 1958 to August 12, 1961.  He was an engineer for the Norfolk & Western Railroad, retiring in 1989 following 33 years.  Jim then worked at Ellis Jewelers for 10 years and the Frankfort Community Public Library.  He was a member of the Manson Congregational Christian Church, Clinton Masonic Lodge #54 and Order of Eastern Star #06.

Memorial donations may be made to the Manson Church, envelopes will be available at the funeral home.

Visitation will be 1-4 p.m. Sunday, July 16, 2017 at Archer-Weston Funeral and Cremation Center. A Masonic service will be held at 3:45 p.m. with the funeral services beginning at 4 p.m. at the funeral home. Graveside services with Military Honors will be 10 a.m. Monday, July 17, 2017 at Bunnell Cemetery.

In addition to his parents, he was preceded in death by 2 brothers, Lawrence & Richard Kaylor and 3 sisters, Ruth Ann Ayres, Delores Kindley & Bonnie Doran.