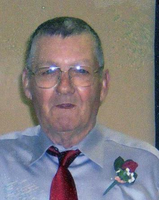 James Franklin Stinson age 74 longtime Lafayette area resident passed away February 8, 2010 in his son?s residence in Frankfort where he had lived the past two years. Born April 3, 1935 in Rolland, Kentucky to Ellis & Ina (Melton) Stinson. He worked as a Mechanic and Truck Driver for Bumgardner Trucking for 22 years until 1992. He enjoyed working on small engines and since his retirement has fixed and sold lawn mowers and small engines. He was a member of the Lafayette Moose Lodge and Frankfort Sons of American Legion and a former member of the Lafayette Jaycees. He married Shirley J. Bowlin on July 26, 1965 in Winchester, Indiana and she preceded him in death on December 20, 2007. Surviving are 4 sons: Jamie L. Stinson (Janice) of Frankfort, Jackie G. Stinson (Cindy), Alvin ?Frank? Stinson, and Ellis ?Dwayne? Stinson all of Muncie. 3 daughters: Sandra J. Anderson (Clay) of Brookston, Kathy Northrup (Steve) and Tammy Palermo both of Lafayette. 18 grandchildren and 3 great grandchildren, 2 brothers: Dewey Stinson (Carol) of Huntsville, IN and Roscoe Stinson and 2 sisters: Margie Redinbo (Carl) of Lafayette and Sue Bell (Jim) of Burnside, KY. He was preceded in death by his wife and a granddaughter. Funeral services will be held 1 PM Saturday February 13, 2010 at Hahn-Groeber Funeral Home 1104 Columbia Street, Lafayette. Burial will follow in Tippecanoe Memory Gardens. Friends may call 5-8 PM Friday at Hahn-Groeber Funeral Home. Memorials appreciated to Lafayette Salvation Army. Arrangements entrusted to Archer-Weston Funeral Home in Frankfort.