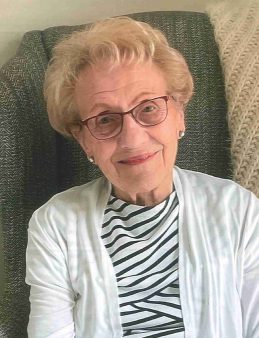 Janet Teckla Kleier Clawson, 89, of Colfax was born on June 1, 1932 and her Heavenly Home-Going was on May 21, 2022.  She was born in Long Island, New York to Edward and Teckla (Schinner) Kleier.  She was named after the movie star Janet Gaynor.  Janet had an older brother, Roland, and a younger sister, Barbara.  She mostly grew up in New Jersey, but her family moved several times as her father sought work during the Depression.  At the age of 10, Janet began using an old sewing machine which was the beginning of her love of sewing.

In 1951, Janet worked at International Printer’s Ink, producing ink that colored boxes for Oxydol and Tide.  Later that year, she attended Newark City Hospital Nursing School.  The following year, her family moved to California where Janet worked in an osteopathic hospital as an undergrad nurse.  Her bi-monthly check was $52, her dad kept all of it but $10.  One day Janet and Barbara walked down the street from their home to get ice cream.  Two Marines drove by and flirted with the girls.  One of them, Herbert Clawson, was smitten with Janet and in 1953 the two were married.

The happy couple moved to Indiana, where Herb was from, and eventually settled in Colfax.  They had four children and became involved in the community.  The family joined Colfax Christian Church, where Janet taught the preschool Sunday school class from 1966 until 2020.  In 1969, Janet was asked to teach Kindergarten which was first held at the library.  Without a degree in education, Janet sought advice and recommendations from local teachers and made her own materials.  Many of her Sunday School and Kindegarten students remained friends with her to the day of her death.

Janet loved her church and her friends.  She faithfully attended every week, even when she was in pain, which was true the week before her death.  She was a “grandma” to so many people and helped make God’s family bigger by teaching others about Jesus.

Another love of Janet’s was working at the Colfax Public Library.  She checked out books and brought joy to everyone who entered for over 40 years.  In fact, she continued working one day a week until a few days before her death.

Janet has influenced numerous people throughout her life as she showed the love of Jesus through her teaching and sewing projects.  She had a servant’s heart, and as a self-taught seamstress, she made Christmas gifts every year for her preschool students and grandkids, great-grandkids and friends’ kids!  Some of her greatest joys included being “Mamaw” and spending time with her grands.  No doubt when she entered heaven, she was greeted by her Savior with these words, “Well done, my good and faithful servant.”  Her legacy continues as her descendants and pupils spread the seeds of Jesus’s love she has scattered throughout the years.

In lieu of flowers, Memorial Donation may be made in Janet’s honor to Disabled American Veterans, 575 N. Pennsylvania St., Indianapolis, IN  46204 or Colfax Christian Church.

Friends may visit 4-8 p.m. Thursday, May 26, 2022 at Colfax Christian Church, 314 S. Clark Street, Colfax. A Funeral Service will be held at 10 a.m. Friday, May 27, 2022 at the church.  Burial will follow the service in Plainview Cemetery, Colfax.  Archer-Weston Funeral & Cremation Center, 501 E. Clinton Street, Frankfort is honored to assist the Clawson family.