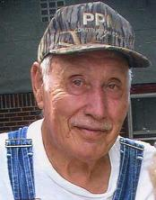 John W. Israel, 81 of Frankfort passed away August 8, 2011 at Mulberry Health and Retirement Community. Born February 14, 1930 in Clinton County to James and Leota (Heffley) Israel. He married Wanda Mitchell on June 17, 1950 in Clinton County and she survives.;Mr. Israel attended Jackson Township School and served as a member of the National Guard from 1949-1950. He worked as a farmer and as a construction worker for several companies including Laborers and Hod Carrier Local 274. He enjoyed gardening, woodworking and cutting wood.;Surviving along with his wife are 3 Sons: John W. Israel, Jr. (Marilyn) of Evansville, Michael L. Israel of Frankfort, and Brian S. Israel (Jamie) of Frankfort, 3 Daughters: Kathryn S. Israel of Lafayette, Teresa A. Blacker (Rick) of Romney, and Lori J. Meredith (Tony) of Frankfort, 4 Brothers: Eugene Israel (Phyllis) of Monticello, Robert Israel (Marie) of Fairland, Donald Israel (Patricia) of Shell Lake, Wisconsin, Larry Israel (Linda) of Tennessee, 1 Sister: Elsie Carlin of Anderson, 16 Grandchildren and 18 Great-Grandchildren, and several Nieces and Nephews;He was preceded in death by his parents.;Services will be held at 10 a.m. on Friday, August 12, 2011 at Archer-Weston Funeral Home. Visitation will be from 4 to 7 p.m. Thursday, August 11, 2011 at the funeral home. Burial will be in Johnson Cemetery in Stockwell.