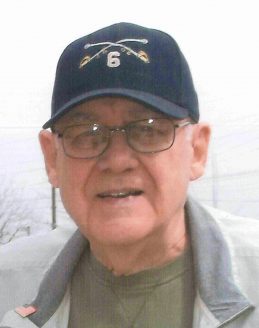 John R. Argy, 87, of Sedalia, Indiana, passed away January 6, 2023 at Milner Healthcare Center in Rossville.  He was born on March 14, 1935 in Buffalo, New York.  John was the youngest of four children born to Bert and Emma (Roth) Argy.  At age 6 months, his family immigrated to Ontario Canada as permanent settlers.

He graduated from Welland Ontario Vocational High School in 1953 and after a few months joined the U.S. Navy in December of 1954.  After finishing 22 weeks of Aviation Electricians school, he was transferred to Naval Aviation Patrol Squadron VP-28 where he trained as an airborne Radar Operator.

In the fall of 1958 he took a 30-day leave and came to Rossville, Indiana to meet the girl he had been writing to for two years.  After being Honorably Discharged on December 10, 1958, he married Patricia (Peters) Seitsma on January 2, 1959 and they enjoyed 64 years together.

He worked for Duncan Electric for a year, then moved to Ft. Wayne where he attended Purdue University Extension and three years later, graduated with Honors of Distinction with a Degree of EET-AAS.

John was hired by Duncan Electric-Landis & Gyr and assumed several responsibilities for about 32 years.  His last nine years were spent in the Marketing Department traveling all over the USA teaching and training Electrical Utilities Technicians as how to maintain and test Electrical Watt-hour meters.  John took early retirement in 1993 and was then hired by the Radian Research Company.  He continued traveling to Electrical Utilities across the USA teaching Meter Techs how to use Radian Meter testing products.  He retired again in 1998 and has spent the ensuing years enjoying time with his wife Pat, his home and family, fishing, hunting, and gardening.

The family wishes to extend special thanks to Milner Healthcare and Guardian Angel Hospice for the wonderful care given to John and the family.

Memorial donations may be made in John’s honor to the charity of the donor’s choice.

In accordance with John’s wishes, cremation will take place with no services held.  Private scattering will be held by family at Bull Shoals Lake, Arkansas.  Archer-Weston Funeral & Cremation Center and Clinton County Crematory, 501 East Clinton Street, Frankfort are honored to assist the family with arrangements.

Surviving along with his Wife Pat, are his Son: Peter H. (Rebecca) Argy, Grandsons: Bill & Brandon, Great-Grandsons: Drew and August, all of Lafayette.

He was preceded in death by his parents, two brothers and a sister.