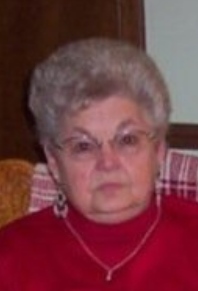 Juanita I. Wildermuth, 88, formerly of Colfax, passed away on Saturday, September 3, 2016 at the Plainfield Health Care Center in Plainfield.

She was born on February 5, 1928 in Darlington, IN to Frank and Pauline (Long) McDaniel.  She married Howard E. Wildermuth on May 4, 1974 in Plainfield and he preceded her in death on November 2, 2003.  She was a homemaker and loved to be with her family.  She crocheted, made quilts, enjoyed doing crafts, and she always had cookies or pie or cake when she knew someone was coming.  She was an excellent fisherwoman and spent many winters at Lake Okachobee in Florida.  She loved to hunt wild mushrooms – and did not like to share them!  She was an excellent cook and hosted may fish frys for her friends and family.  She was an active member of Colfax Wesleyan Church until her health declined.

A funeral service will be held at 10:30 a.m. Wednesday, September 7, 2016 at Archer-Weston Funeral & Cremation Center in Frankfort. Friends may visit from 9:30 a.m. until the time of the service at the funeral home. Burial will follow at the IOOF Cemetery in Darlington.

She was preceded in death by her parents and siblings: Jim McDaniel, Robert McDaniel, Jack McDaniel, Joe McDaniel, Margarete May and Virginia Parks.

One Condolence for “Juanita I. Wildermuth”