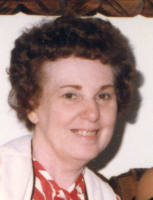 LaDonna M. Roth, 88, of Frankfort passed away Wednesday, January 3, 2015 at Clinton House Health & Rehab Center. She was born on January 12, 1926 in Frankfort to William and Bertha (Kelley) Phillips Married: Colonel Smith in 1943 and he preceded her in death on January 21, 1976. She then married Myron L. Roth in 1987 and he preceded her in death on October 26, 2007. LaDonna lived most of her life in Clinton County and was a homemaker. She also worked at Peter Paul Cadbury. She was a member of the Order Easter Star and the Eagles Auxiliary.

Private family services will be held at Archer-Weston Funeral & Cremation Center. Inturment will follow in Bunnell Cemetery. In lieu of flowers, memorial donations may be made in LaDonna's honor to the Clinton County Humane Society, 825 Izaak Walton Drive, Frankfort, IN 46041.

She was preceded in death by her 2 husbands.