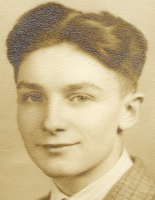 Leslie Stevens, 93, of Frankfort passed away Friday, February 28, 2014 at St. Vincent Frankfort Hospital. He was born on July 1, 1920 in Winamac, Indiana to Cecil Leslie and Sylvia Belle (Hughes) Stevens. He married Evelyn L Younger on July 18, 1946 in Frankfort and she preceded him in death on March 19, 1997. Leslie is a 1938 graduate of Stockwell High School. He assisted his father in tuning pianos and organs . He served in the United States Army from 1944 to 1946 during World War II and again from 1950 to 1951 in Korea. He worked for PR Mallory for 15 years and for UNR-Rohn Inc. for 12 years. He was also a member of the VFW and Moose lodges in Frankfort and was an active member of the 393rd Battalion Veteran’s Group. Leslie was a sports enthusiast who enjoyed watching his grand and great grandchildren’s activities. He also enjoyed pitching horseshoes, mushroom hunting, fishing, and euchre. Survivors include his Son: Ronald P. “Bo” Stevens of Frankfort; Daughters: Jackie L. (Larry) Ayers and Gail S. (Tim) Riedel of Frankfort; Brothers: Gordon Stevens of Delphi and Herbert (Carol) Stevens of Lafayette; Sisters: Marilyn Rohlfing of Fishers and Maxine DeVoss of Rockford, IL; Grandchildren: Susan Ayers (Ed) McRoberts; Tim Ayers; Jay (Cathy) Ayers; Jeremy (Sara) Fisk; Spencer (Adrienne) Fisk; Megan Fisk (Chris) Hamilton; Amy Riedel (Robert) Stone; and Frank Riedel; and 19 Great Grandchildren. He was preceded in death by his wife, brother: Milford and sister: Dorothy. Funeral services will be held at 1 p.m. Wednesday, March 5, 2014 at Archer-Weston Funeral and Cremation Center. Friends may visit from 11 a.m. until the time of service at the funeral home. Burial with Military Honors will follow in Bunnell Cemetery. Memorial donations may be made to the Clinton County Cancer Fund with envelopes available at the funeral home.