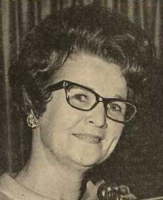 Lorraine S. Grove, 90, of Mulberry passed away January 15, 2012 at Mulberry Health and Retirement Center, Mulberry. She was born October 16, 1921 in Virginia, MN to Charles A. and Serafina (Leppala) Sandnas. She married James E. Grove on November 13, 1943 in Santa Monica, CA and he preceded her in death on October 8, 2008.;Mrs. Grove graduated from Washington High School in Virginia, MN in 1939. She and her husband moved to Frankfort in 1947. She was a stenographer/bookkeeper for 35 years at Nickle Plate Railroad which became the Norfolk and Southern Railroad from which she retired in 1982. She was a member of St. Paul Lutheran Church along with memberships in the women of the Moose, Elks, and Tau Phi Lambda Sorority. She enjoyed traveling, Chicago Cubs baseball, and their Pug dog, Mitzi.;Survivors include a Son: Philip J. Grove of Chicago, IL, Sister: Judy Marshall of Virginia, MN, Brother-in-law: Richard (Helen) Grove of Frankfort, Several Nieces and Nephews.;She was preceded in death by her parents, husband, 1 brother, and 5 sisters.;Services will be held at 11 a.m. on Wednesday, January 18, 2012 at St. Paul Lutheran Church. Visitation will be from 10 a.m. until time of service at the church. Entombment will be in Green Lawn Mausoleum in Frankfort. In lieu of flowers, memorial donations may be made to St. Paul Lutheran Church with envelopes available at the church.