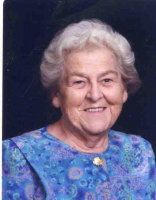 Mary Ann Kimmel age 83 of Newtown, Indiana formerly of Frankfort passed away December 4, 2008 in St. Vincent Hospital in Williamsport. Born March 16, 1925 in Mt. Vernon, Indiana to August & Cecilia (Wolf) Koressel. She married Claude E. Kimmel on July 6, 1942 in Booneville and he preceded her in death May 1, 1995. She was a farmer and active in the Kingdom Hall of Jehovah Witnesses. Surviving are her children: Claude J. Kimmel, Claudine McBride, Judith Lemon, Yvonne England, and Wilma ?Jeanie? Hudson, 21 grandchildren and several great grandchildren. She was preceded in death by her husband, a daughter, and a sister. In honoring her wishes a memorial service will be held Saturday December 13, 2008 at the Veedersburg Kingdom Hall of Jehovah Witnesses. Burial will take place at Scotland Cemetery in Kirklin. Arrangements were entrusted to Archer-Weston Funeral Home in Frankfort.