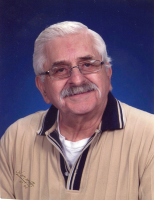 Max E. Goff, 79, of Colfax passed away July 16, 2013 in his home. He was born June 11, 1934 in Frankfort to Lawrence W. and Mary Belle (Jacobs) Goff. He married Patricia L. Anderson on December 21, 1958 in Frankfort and she survives. Max graduated from Frankfort High School. He served in the United States Navy from 1952 to 1956. He worked as a barber for Goff’s Barber Shop in Frankfort, was a postman in Frankfort for 18 years, and delivered the Indianapolis Star for 10 years. He worked for one year at Purdue and for ten years at Ivy Tech in Lafayette. He was a member of the Colfax Christian Church. Surviving along with his wife Pat are daughter: Christina L. Oldham of Colfax; son: James L. Goff of Frankfort; brother: Philip (Georgia) Goff of Mayfield, KY; 4 Grandchildren; and 6 Great-Grandchildren. He was preceded in death by his parents, a daughter: Becky Jo Goff and a brother: Michael Goff. Services will be held at 10:30 a.m. Monday, July 22, 2013 at Colfax Christian Church. Visitation will be from 2 to 6 p.m. Sunday, July 21, 2013 at Archer-Weston Funeral Home. Pastor Dave Collier will officiate. Burial will be in Plainview Cemetery in Colfax. Memorial donations may be made to Colfax Christian Church, Guardian Angel Hospice, or Lafayette Cancer Center with envelopes available at the funeral home.

One Condolence for “Max Goff”