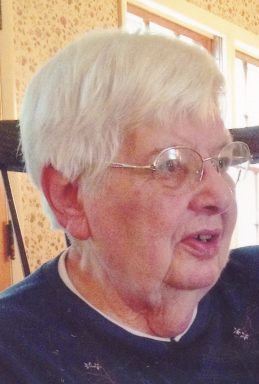 Nancy J. Merten, 83, of West Lafayette, formerly of Frankfort, passed away on Wednesday, November 29, 2017 at Heritage Healthcare in West Lafayette.

Nancy was born on December 31, 1933 in Frankfort to Morris and Olive (Douglas) Blystone.  She married Herbert Merten on September 26, 1964 and he survives.  She is a 1952 graduate of Frankfort Senior High School and worked as a library aide for Twin Lakes School Corporation at Roosevelt Middle School in Monticello and had formerly been a secretary at Lafayette Life Insurance Company.  Nancy was an avid reader and enjoyed cooking and making cards and crafts.

Memorial donations may be made in Nancy’s honor to the Kilmore United Methodist Church, 4159 N County Rd 0 EW, Frankfort.  Envelopes will be available at the funeral home.

A funeral service will be held at 2 p.m. Monday, December 4, 2017 at Archer-Weston Funeral & Cremation Center, 501 E. Clinton Street, Frankfort.  Friends may visit from Noon until the time of service at the funeral home.  Pastor Craig Overman will officiate.

Surviving along with her husband Herbert are her Son:  Pete Merten of Ft. Wayne, IN;  Sister:  Kay (Jeff) Blackburn of Arizona;  Brother:  Jim (Jeanie) Blystone of Brownsburg, IN;  and several Nieces and Nephews.

She was preceded in death by her parents and a sister and brother-in-law:  Sandra and John Kilmer.