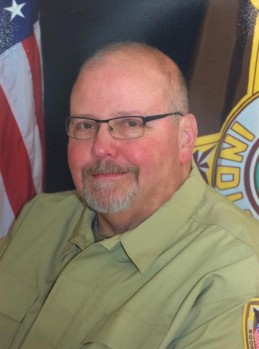 Peter L. “Pete” Hemmerling 57  passed away on Saturday, July 4, 2015 at St. Vincent Hospital in Indianapolis.  He was born on October 4, 1957 in Frankfort to Frank & Helen (Hill) Hemmerling.  Pete married Cheryl E. Young on September 22, 1986 and she survives.  Pete was a 911 Communications Officer with the Boone County Sheriff’s Office.  He had previously worked for Tippecanoe County and the Frankfort Fire and Police Departments.  A lifelong Clinton County resident, he graduated from Frankfort High School in 1975.  His memberships included St. Mary’s Catholic Church, Knights of Columbus and the Fraternal Order of Police.

A Funeral Mass will be held at 10:30 a.m. Wednesday, July 8, 2015 at St. Mary’s Catholic Church in Frankfort. Friends may visit from 4-8 p.m. Tuesday, July 7, 2015 at the Archer Weston Funeral Home and Cremation Center. The Rosary service will begin at 3:30 Tuesday. Memorials may be made to the Clinton County Boys and Girls Club or St. Mary’s Church. Online condolences may be made at archerweston.com.

In addition to his father, he was preceded in death by a brother, Steve Hemmerling.