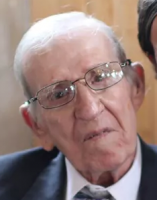 Phil Randolph, 83, of Frankfort passed away Thursday, September 4, 2014 at Mulberry Health & Retirement Community. He was born on October 28, 1930 in Owen Township, Clinton County, Indiana to William E. and Hazel (Gunyon) Randolph. He married Kay Jean Reed on August 28, 1954 in Danville, IL and she survives. A lifelong Clinton County resident, Phil was a 1948 graduate of Colfax High School. He served as an Airman 1st Class in the United States Air Force from 1951 to 1955. He worked in the shipping department for Ing-Rich for 17 years and was a school bus driver for Frankfort Schools for 25 years. He and Kay managed Broadview Lake Campground for 10 years. Phil was a member of the First Christian Church, Frankfort VFW, American Legion Post 12, and the Frankfort Eagles. Phil was an avid bowler and was the secretary for the Frankfort Bowling Association. He was a cub scout leader and he coached little league baseball for many years.

Funeral Services will be held at 4 p.m. Sunday, September 7, 2014 at Archer-Weston Funeral & Cremation Center, 501 East Clinton Street, Frankfort, IN. Friends may visit from 1 p.m. until the time of service on Sunday at the funeral home. Burial will follow in Green Lawn Cemetery at a later date. Memorial donations may be made in Phil's honor to the Parkinson's Disease Foundation or the Clinton County Humane Society with envelopes available at the funeral home.

He was preceded in death by 3 brothers and 2 sisters.